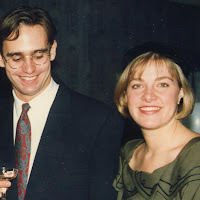 I gave CP (shown here ogling the breasts of our friend KC at my brother's wedding) permission to ask me five questions, what since he was such a good sport with mine. Here are the things he wants to know.

1. Describe in graphic detail the angriest you’'ve ever been in your life. What caused your outrage and why? Do you feel your anger and reactions, whatever they may have been, were justified?

I know you were hoping for some juicy story where I opened some can of whoopass on someone, but that's not really me. I'm pretty good at standing up for myself in the moment so things don't build to full-fledged anger in my relationships. I am extremely easy going, I avoid conflict by not letting things build up, and I don't let myself get worked up over things that don't really matter. Most of the time.

But on occasion, I am also prone to bouts of extreme rage, never at someone but at a situation. The rage manifests itself as a physical spasm and I have to let out a blood-curdling scream, hit something or break something to get it out of my system. The first time this happened was in college... I had all sorts of emotional turmoil and stress going on, and then Cantagallo did or said something that pissed me off and I threw a bottle of my roommate's perfume across the room. (Resulting in one pissed off squeally girl from Waukegan. Talk about a voice that could cut glass. All over some Jean Nate or Love's Baby Soft or Enjolie or something.) This continues to happen when I am under extreme stress, usually for something small and insignificant that just triggers me. It's usually not appropriate or justified...I just reach a tipping point and blow. And what's even more stupid is that people watching have no idea why I'm reacting this way because the trigger is always relatively minor...there's just a lot of back story, usually completely tied to my own neuroses. It's not actually anger building up. It's just emotions taking me over.

Dale, of course. He's handsome, he's funny he's an A1 certifiable deity in the blogging world, and he is a great flatterer. You, on the other hand, ask pointed questions, are obviously emotionally needy and make me wash my car.

3. Select two areas of your life that you feel need improvement. Discuss.

My wardrobe. I am too eclectic and have trouble assembling a cohesively sophisticated work look, and I need to invest some money in properly fitting clothing because most of my stuff is too baggy. I'd be up for some new shoes while I'm at it, because many of mine are starting to look dumpy.

My finances. I am sick of being broke. I don't make enough money and I don't like to budget. I hate all things associated with money.

4. If someone held a gun to your head and said “DENY JESUS CHRIST OR I WILL BLOW YOUR BRAINS OUT!!!” what would you do and why? *In case any of your Gentle Readers are wondering, this very question was posited to me by my sixth grade Sunday school teacher.

I would laugh, because that is a ridiculous thing to say. Your sixth grade Sunday school teacher was an asshole. Then I would ask questions. Deny him what? TV privileges? Dessert if he doesn't clean his plate? Nookie? I mean, what does that even mean?

Likely, the lunatic would then explain (in a shouting rage, of course) that I was supposed to deny that JC existed or that he was the Son of God or something. I would then waffle. Because I don't know. I'm not an atheist. I like the idea of Jesus. I like the things he stands for. I like praying, because it helps me focus and makes me feel better. I like to think that there is a pure force of good in the universe, because frankly I have to watch too much evil in my day to day life. And I would want to know what harm there was in that. Why anyone would be such a prick that they'd make you choose. I mean, why be so angry that you're forcing people at gunpoint to deny something/someone that isn't really causing a problem?

Likely by now the sort of moron who would be issuing this sort of ultimatum would have pulled said trigger, but if they were still listening to me, I'd be getting annoyed. So I'd tell the dumbass he was a stupid twat and should just f**ck off, because no one tells me what to do. And get shot in the head for insulting him.

(NB. You know I separate the concept of JC from Kristians, because they are evil spawns of Satan sent to bastardize Christianity, thus making it impossible for thinking people to ascribe to it. I'd tell your Sunday school teacher that he/she/it WAS the gunman, because they were holding a figurative gun to the heads of normal people by insisting on creating some fringe-whackadoo religion that forces reasonable people to flee.)

5. If you had to take a week long cruise, would you rather go with my parents or the Costanzas? (You have to go alone with whomever you choose.)

I'd definitely choose your parents. They're always nice to me, your father's non-sequitors make me laugh and I'd get to do crossword puzzles and story problems at breakfast. The Costanzas...they're just weird.

lulu said…
Cantagallo. There's a blast from the past. Does he still exist?

You are SO my sister in so many ways, what with the money issues, and the clothes issues, and feeling that CP is emotionally needy...
8:19 am

Melinda June said…
Cantagallo is dead to me. I imagine he still exists, though. But I don't care.

Joe said…
Hey, Melinda June, when you visit we can compare rage stories. My best one ended in a fractured hand, two crying children and a wife speaking to me in the calm, measured tones of someone speaking to a hostage taker.
1:41 pm

Coaster Punchman said…
At least you're the first to give all honest answers. I'll tell my parents the good news and start booking your tickets. (It's time you pick up some of the slack; I've been putting up with them for 41 years.)

As for the JC questions my teacher asked me, I guess the point was to illustrate that we should devote 100% to His cause to the point that we would give up our very lives rather than deny Him. Quite the fucked up example, though. Why couldn't she have said "if you were invited to the movies on Sunday morning, would you go or go to church?" (And of course my answer would have been "I would go to the Saturday night service instead!")
3:54 pm

Melinda June said…
Don't forgive her. She was terrorizing children. She didn't happen to have a clown suit, did she?
4:02 pm

Coaster Punchman said…
Come to think of it, she did vaguely resemble a swan.
5:08 pm

Dale said…
There's a reason he put me under 'number two' I just know it. Now that you're a flatterer, I will think of even more ways to make you love me.
10:23 pm