Showing posts from May, 2005
Show All

My trip to Oman 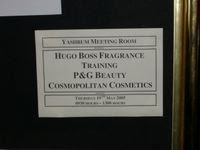 I am home safely from my trip to Oman. What a great place! We took an overnight flight from Heathrow. I'd allowed two hours to get to the airport since I had be there by 630 and motorway traffic can be a bitch. It only took me 55 minutes. Killed time at the airport Holiday Inn with a cup of coffee, and then headed to the airport to valet my car. There were 10 of us on the trip, plus the two hosts. Everyone holds a position similar to mine at one of the competitors. All quite likeable, and ended up being good travel companions. We flew business class, so we were very comfortable. They had 21 channels of entertainment to choose from, but since I'd been sick I thought I'd best try to sleep. Should have watched the film. Didn't get a second of shut-eye, so by the time we arrived in Oman seven hours later I was totally blitzed by tiredness. Muscat has a small airport...the kind without jetways. By the time we'd walked down the steps to the tarmac we were sweating. It
Post a Comment
Read more

May 18, 2005
I was standing in line to buy a sandwich at the garage today, and happened to glance over at the magazine rack. One of the lad's mags was carrying the cover story of the top 100 boobs in the business. Another was touting 100% REAL boobs in theirs. Couldn't help but wonder if there was any overlap. And it seems a lot of press for breasts, really. There are probably 200 pairs between the too mags. And that doesn't include the editing staff.
1 comment
Read more 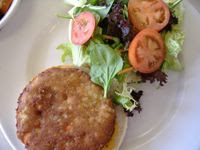 We left around noon Friday for Edinburgh. We had a couple of errands to run...a bigger photo chip for the camera, a coach ticket to the airport to be sure Ben had a seat...and then we hit the highway. We made it an hour up the road to Nottingham before stopping for lunch. Ben loves truck stops and I love general road-trip culture, so we decided to stay on the motorway and eat at the "services." All over the UK there is a roadside chain called the Little Chef. Their logo is this happy little guy holding up a plate of food. He looks not unlike Ben if he gained 50 pounds, put on some footie pajamas and a chef's hat, and grinned like a moron. It's kind of like a down-market Denny's. Here's what we had for lunch: My Lunch - veggie burger and salad Ben's lunch - tempura vegetables with chili sauce and mayo We continued north, first on the motorway and then on the A1. We passed Newcastle and then drove along the North Sea coast until we made Scotland. The v
Post a Comment
Read more

May 16, 2005
Ben and I were discussing our shared fascination for the miracles of shipping. And he mentioned that there are hundreds, nay, THOUSANDS of shipping crates that fall off liners on their way across the oceans, falling to the bottom of the sea. I'm thinking WOW! Imagine what's in there! Jewels! Precious paintings! Plutonium! 1986 Hondas! I'm thinking we write a script that has sea pirates raiding these containers, perhaps lead by Vin Diesel. And then some sassy young woman (maybe Scarlet Johannson in an offshoot to action adventure, or perhaps Jennifer Garner in an attempt to jump-start her sagging one-note career) shows up. She knows the TRUE SECRETS of the EVIL CO. and will convince the pirates to help her prove their menace to society by unearthing the stolen plutonium lost at sea. They can fight off man-eating Humboldt squid, maybe some Arab terrorists who want the plutonium for a bomb, and of course EVIL CO's dastardly minions who will stop at nothing to save
Post a Comment
Read more

Ben is NOT here

May 16, 2005
One week gone, and now Ben is, too. I was sick, my flu turning into a cold that settled into my chest like an anvil. Been coughing and weak pretty much since last Tuesday, and I need a doctor. Called NHS Direct for advice on how to deal with getting medical care with US health coverage (to summarize: good bloody luck,) and I think if things go my way I can get to the doctor tomorrow. In spite of my health, we still had fun...just mellower than expected. And since Ben is a 39-year-old med student who's been working 16 hour days in a research lab for the last month, he didn't much complain when I demanded we get some sleep. He had a nice visit to his retired minister friends in Cromer. (Folks he met when he was living in Eritrea, who've since retired and moved home. They live in a nice little town on the North Sea coast.) Since I missed work with the flu I had to work some on Thursday, so we ended up taking the train to London in the afternoon instead of heading to Scotl
Post a Comment
Read more

May 10, 2005
After a two-month stretch with no guests, finally I have a visitor. My friend Ben arrived yesterday afternoon. Ben's attending med school in Iowa City right now and had a little break to spend here in the UK. We have a big week planned...he's traveling to other parts of the country today and tomorrow to visit other friends, and then Thursday we head to Scotland. I've known Ben since I was five years old. In fact, if we calculated anniversaries we just passed our 33rd earlier this month. We met on the kindergarten bus shortly after I moved to Decorah. We both had a geeky affinity for dinosaurs which proved an immediate source of bonding, and general geekiness and assorted misanthropery has kept us close since. Ben remembers when I had a lisp. Ben knew me when I experimented with odd haircolors and combat fatigues. (Okay, many of you would argue that I still experiment with odd haircolors...and I'll concede the point for now, though I've been sticking to enhancing m
3 comments
Read more

May 09, 2005
I've had the flu this weekend. On Friday I was getting a sore throat, by Friday night I couldn't swallow properly, and by Saturday AM I had the whole fever/chills/headache of a full blown flu. Being sick this far from home isn't fun. There's no one to whine to who will feel sorry for me and bring me things. Flu-time is when you want comfort food and a People magazine...we've already covered the unfamiliar foodstuffs issue, and while you've got lots of trashy magazines to choose from here there are none as innocuous as People. Worst of all, the cold and flu medications all have different names and different packaging, so I can't just go get what I normally take. I had to read every package to find the right combination of something that will ease my symptoms without making me pass out for hours or making my heart race at 100 beats a minute. I had a difficult run to Tesco to get my flu-friendly arsenal of products, but somehow I figured it all out without pa
Post a Comment
Read more

May 03, 2005
My friend Lauren is so lucky. She just won the COOLEST thing ever. WXRT Chicago had a contest to win an Ultimate VIP package for a week, and after an essay and an interview, she WON. She gets to go to 8 concerts in 7 days, escorted in a limo, and then she gets to blog on the radio website and do live commentary on the radio in the morning. She's seen Lenny Kravitz and the Wallflowers so far, and she gets to see Garbage (twice), New Order, Wilco, Coldplay, and U2 before the week is out. I am so jealous I can't stand myself. Go to the Land of Lulu link on this site for her personal blog, or the VIP Lounge at WXRT's site for the professional one.
1 comment
Read more

May 02, 2005
Today is the May Day bank holiday. Originally I had no plans for the three-day weekend, but then on Friday I sold a meeting later this month in Bournemouth at a hotel that we hadn't seen, so I arranged for a room and went to the beach yesterday. Along the way, I stopped in Salisbury for lunch and had a chance to walkaround and catch a little parade, saw some kids dancing around the maypole, and the town band gave a little concert. Found an excellent thai restaurant for some tom ka gai and a spring roll and then headed on. I'd planned to go look at the big chalk giant , but there were pagan May Day plans there and I wasn't up to the crowds. Instead, went to Sherborne and toured Sir Walter Raleigh's house , wandered the garden, and spent some time on a bench amid castle ruins playing the ukulele. (Didn't get any tips, but got some funny looks and a couple of ovations.) There was an older woman named Elsie who had parked her three-wheeler on a bridge about half way
Post a Comment
Read more

May 01, 2005
Chop up an onion. Heat a pan, add 1T of butter and 1T of olive oil, and when it's hot add the onion and a smashed clove of garlic. Make the onions translucent, then add 1 cup of medium pearl barley. Toss around the pan for about a minute, then add two cans of beef consomme and two cans of water, plus salt, pepper, and tabasco. (Tabasco makes this scrummy, so be sure not to go light...there's a lot of soup there....) Simmer this for an hour. (I added some dill here, too, but you wouldn't have to.) Meanwhile, chop up a pack of mushrooms...cremini, portobello, plain old button, whatever you want....and saute them until they release their juices in the same butter/oil ratio you used for the onions. Toss with some parsley and set aside. When the hour is done and the barley is edible take 3/4 cup of low fat sour cream, put it in a bowl, and add a ladle or two of broth from the soup. Once the s.c. has melted into the broth you add that back to the soup, toss in the mushdog
Post a Comment
Read more
More posts