June 21, 2006
Whilst flipping through channels tonight to avoid the Desperate Housewives finale and that bloody World Cup, I decided to stop for a little VH1. They're doing the top 10 Irish artists at 10. So I'm watching videos of Irish singers and bands while I blog and surf tonight. 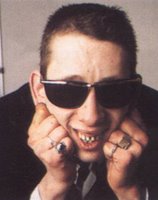