June 20, 2006
For you Americans, there is a thing happening in Germany right now called the World Cup. It's like the Olympics, except it's all about football. (That's what you colonists call "soccer," FYI.) Everywhere else in the world, people are riveted to their televisions watching it. (You might be able to find it on your cable or satellite tv channels somewhere in the high 200's.)

So sorry. I condescend. It's my new thing. I'm going to try out being an arrogant expat. I've decided that I'm adapting an "I'm cooler than you" tone from this point forward when I speak of my life abroad. It will make it less noticeable when I say things like "tinned to-mah-tos, " "put it in the bin," or "bloody hell." Because I'm bracing myself for the heaploads of poo you'll be shoveling my way about my Iowan-via-London accent when I'm home next month.

Back to the World Cup. These people are NUTS. Everything stops for the damn football games. While the England games are certainly the most popular, people will watch absolutely anything. They're drunker than usual at the pubs, and you're regularly asked who you're supporting...and the answer had best be "England" or they'll report you to the Home Office.

Most of the year the St. George's flag, traditionally the flag for England (not the UK), is used as code for the white supremacist/anti-immigrant movement. But now that the World Cup is here, it is being used as the rallypoint for England. (In the World Cup, Scotland and Northern Ireland have their independence.) It's not quite as bad as the US having a Klan mascot dancing on the sidelines and leading the Wave, but it's close.

There are St. George's flags hanging from every window and balcony, in pubs and shop windows, and on every car in England. As my housemate Kat says, they'd shove it up the dog's arse when they're taking it for a walk if they thought it could still do its business. Here's a car in the parking lot at work. (Note...it's a creepy Citroen, which is noteable for it's egglike design...is that high style, or what?) 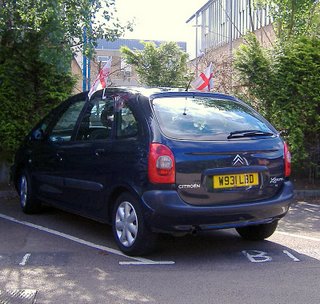 Or how about this? It's our vending machine in the kitchen at work. 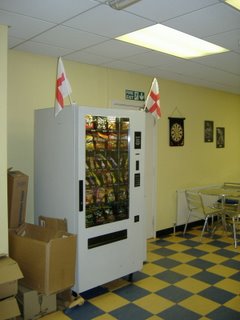 I passed a car in the Tesco lot the other day that had an actual flag in the back window, four flying flags (one on each door), and another window painted on each of the back seat side windows. That guy shouldn't be allowed on the road, but if he'd passed a police car they would have honked their support for the team.

I've never been a joiner and I'm not going to start now. So I'm rooting for Argentina and South Korea, and anyone who's playing England.

I can't commit to Germany, though. That would get me killed.

lulu said…
having a faux Brit accent makes you cool? Who are you, Madonna?
4:41 pm