February 08, 2007
About 5 years ago, my friend Bethany bought me some of my favourite shoes ever. Boots, actually. She wanted to give me something special, plus they were on sale and they were the last ones in the store so you couldn't really leave them there, now could you?

They were FAB-U-LOUS. Red leather motorcycle boots with a black rubber Vibram sole. Oil and water resistant. Kind of tomboy, kind of girly....very much like me. Good with jeans, good with skirts, good with pretty much anything I chose to wear. Never wore them with my black tulle ballgown skirt, but thinking I could have done so on the right occasion. 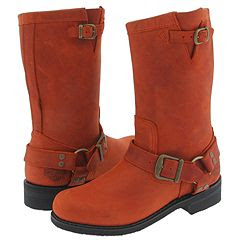 My boots were like this, except cranberry red, not orange.

These boots went everywhere with me. I wore them every time I flew because they were easy on/off at security and didn't pinch my feet when in flight. They've walked miles with me. Sure, they got a bit scratched on the toe from kicking things and were perpetually in need of a polish, but the shaft of the boot had developed a lovely patina from rubbing against my trousers and they conformed to every contour of my feet. I wore them at least five times a week.

Friends had mixed feelings about my boots. Some found them a daring choice, what since red is mighty bright for footwear. I told them red was the new black, and once even claimed they were made of the finest bird leather...rare, they were, not just precious. Eventually folks saw the light. (My patent red leather mary janes joined me at a similar time, as well, and so perhaps they just became immune to red on my feet.) Darlene nagged me now and again to spruce them up because I was looking a bit dutchy, but she never disrespected the aura of the boots...just suggested I show them some love.

England is a wet country, and about six months ago I noticed that my feet were slightly damp sometimes when I wore my red boots. I took time to inspect the soles, and sure enough, they were starting to wear into the seam. Rats, I thought. They need help.

I continued to wear them, but when I was home for Christmas I took them to the cobbler in my hometown (who is known to work magic with boots) in hopes he could solve the problem and buy us some time. Sadly, they were terminal. I wore them a few more times while I was home, but worried that I was merely hastening their end. I even bought a pair of deep red danska clogs in an effort to replace them in my wardrobe. But I couldn't bear to part.

It took me a few minutes to decide. I went back and forth a few times. But, in the end, I chose the clogs. I left my red boots at my folks' house, giving my mother STRICT ORDERS to ensure they were safe and did not end up in the landfill or the Depot while I'm away.

I made it a whole three days back in the UK before I began googling for red engineer boots. To no avail. None. Just the orange ones you see above and the bog-standard brown and black. The search became something of a mission. And then I found these. 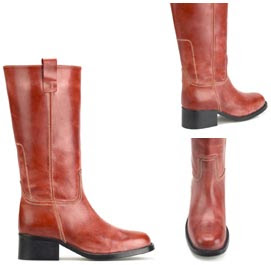 And they were on sale. Not engineer boots. Not pure red. Not perfect. But they had potential. And so I decided to give love another chance.

My boots arrived yesterday. They are actually a bit more mauvey-red-cranberry than I'd expected. But I think they will fit into my life. They zip instead of slip on, they have more of a fashiony look than I'd expected, but they are smart and comfortable and well worth the investment.

But I'm still not ready to commit. I've decided to consider my options before I give myself so freely again. Here are some of the candidates I've found at Zappos: 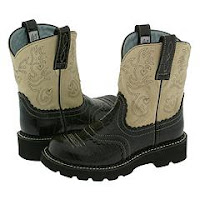 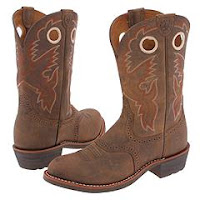 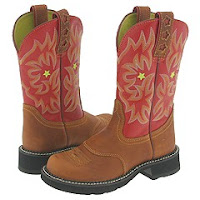 Obviously, I have a little Western thing going on right now. I've never really considered myself a cowgirl, but why not try new things once in awhile?

I'll keep you posted on how the relationship develops.

And note to my mother: Just because I'm seeing other boots doesn't mean I'm not expecting a reunion with my favourites when I'm home this summer. Don't you be getting ideas.

lulu said…
I think people are either red shoe people or not. I love red shoes and have owned numerous pairs throughout my life, although not any boots (yet). Other people, ie. Beautiful Jane, seem to feel that red is too flashy and that footwear should only come in black, brown, and maybe some sort of neutral like camel. No red.

I applaud your footwear choices my friend.
10:55 pm

Joe said…
Great shoes all! I especially like the red ones pictured large at the center of your post, and those brown ones with the detailing in the lower left corner.
11:46 am

urbangal said…
Have I got a website for you.

www.rocketbusters.com. Some of the boots are "spendy," okay, a lot of them are. But oh my they are some of the yummiest boots I've ever seen.