February 10, 2007
Okay, so it isn't daily. It's when I feel like it. Maybe I'll rename it something lame like "Character Actors I Like" or "Almost Starsearch". I'll figure that out later. Now...on to Stephen.

Who is Stephen Tobolowsky, you ask? Hey now, don't you tell me you don't remember him 'cause he sure as heckfire remembers you. He played Ned... Ryerson. "Needlenose Ned"? "Ned the Head"? C'mon, buddy. Case Western High. He did the whistling belly-button trick at the high school talent show? Bing. Ned Ryerson, got the shingles real bad senior year, almost didn't graduate?

When I see Stephen Tobolowsky, I see him in Groundhog's Day, annoying our protagonist, Bill Murray, as he walks down the street and then into a giant puddle. But his talents don't stop there. He's been in hundreds of television shows, ranging from Buffy to Seinfeld to CSI to Deadwood. His credits include edgy things like Memento and stupid things like Freaky Friday (the Lindsay Lohan version, of course.) He was even on the Rockford Files. The guy is an everyman, a chameleon. I imagine him to be the sort of guy that could just as easily have been an accountant or a middle-manager in some Little Rock advertising agency as he could an actor. He's a clock in, do the job, clock out, and go home for a nice dinner with the family sort of guy. Or maybe he's some crazy alcoholic barfly who dates transvestites and smokes two packs a day. Who knows. I mean, he's just that good.

And he's a dark horse, as well. Check out this documentary he made. He says it's better than Spiderman 2. I'm inclined to believe him. 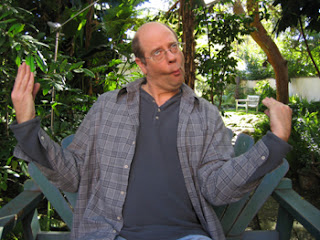