Relaxing in the English sun

July 23, 2008
1. I spent my birthday relaxing in the garden. Read papers, drank coffee, soaked up some sun. It was lovely. When they were done working for the day, Kieren and Corrie and I split a bottle of champagne. Or rather Corrie and I did. Then they took me to dinner at a lovely Italian restaurant. came home, had more champagne and sat in the garden chatting. It was a lovely day.
2. They have one of those strange wand things in the shower, much like the enema looking thing at the Royalton. This morning, I learned that if you accidentally turn it on when you're just trying to turn on the rain shower it will spray you in the face. It is surprising.
3. I burned my forearm on a wok, but didn't realise it until today when the blister popped.
4. Took the train to London and then on to Milton Keynes. I'm staying here tonight and tomorrow, having dinner with friends and meeting the movers when they come pick up my stuff. I have one last chance to rescue some favourite things from the two month exile. Thinking I may need to grab the first few seasons of Curb Your Enthusiasm as K&C have not seen it.
5. How's this for odd...I often call Kieren "KB", his initials. And I call my friend Karen "KB", too - HER initials. And now I typed K&C for Kieren and Corrie, their initials. And I have a very close friend named KC - HER initials. Talk about a plate o' shrimp.
6. I just finished a book called The Post Birthday World by Lionel Shriver. Don't read it. It sucked. The only things to like about it were the really bad approximation of a cockney accent, which was laughable, and the fact that eventually it ended. It was one of those books that you read and you are on page 200 and you can basically predict the remainder of the plot. Which is compounded by the fact that it uses this parallel universe plot device wherein about chapter two she decides to kiss/not to kiss a man who is not her partner, and so the rest of the book has two of each chapter so you can see the two paths side by side and compare how her decision impacted her life. I liked Sliding Doors so I figured this might be okay. It was not. I found the characters flat, the writing stilted and obvious, and at times I felt like some metaphorical hammer was slamming me in the temple to make sure I got her point.
7. It was lovely and warm today. Really just a perfect summer day. 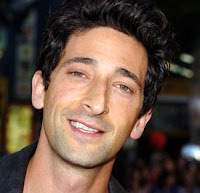 8. I forgot that I needed to add Adrian Brody to the sexy man list. Which means I should probably remove someone. So I'm taking off Clooney. He'd frighten me in real life anyway. Smooth men intimidate me.

9. There is a great program called 10 Years Younger, where they do massive makeovers of people who look much older than they actually are. They gauge their age by having them stand in the street before and after the makeover and let 100 people guess their age. Often there are women who are younger than me who look like they're 60. It's shocking. You get fashion, makeup and hair tips AND you get to see the plastic surgery. It's awesome. As you might guess, many of them have very bad teeth.
10. It's supposed to be sunny tomorrow, too. Perhaps I'll relax and sit in the sun while I read the newspaper. That would be delightful.

6, I read one of Lionel Shriver's books for book club last year and swore I would never read another. Not only did I not like the book, but the interview with the author made me beyond annoyed.

8, I would be happy to take Clooney off your hands for you.

michaelg said…
6. I hate disappointing books. Don't EVER read The Memory Keeper's Daughter. So predicatable. So syrupy. Bleh.
8. Remove Brad Garrett! But if you need to get rid of Clooney, I'll understand. His pretty is well used everywhere.
9. That sounds like the U.S. program The Swan, except on that program they took average women and made them look like overly inflated prostitutes.
10. Relax. Enjoy.
7:36 am

Melinda June said…
We have a different version here, Lu. The host is this Nicky woman whose nose is too fine.

Brad Garrett's going nowhere, MG. Brad Garrett is sex on legs. I'd ditch Depp, Clooney AND Brody before Garrett. Don't hate him because of Raymond. Everyone makes mistakes.
11:57 am