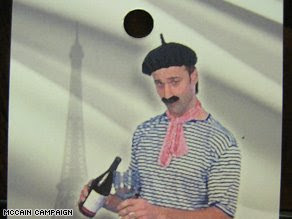 Nothing says, "I'm a seasoned diplomat who will raise our standing in the world and gain global consensus for the war on terror," like a grotesque stereotype of a European power used to taunt your press entourage into hating the other guy.

Seriously, who in the McCain campaign is that stupid? The joke might actually be funny if it appeared as an op ed cartoon from a neutral source. Because it IS kind of funny that normal journalists with months on the Obama campaign have been kicked off so Katie Couric and that annoying Charlie Gibson can get a holiday abroad. And who doesn't find a Frenchie in an ill-fitting beret and a neckerchief amusing? About the only thing that would make that funnier is if he talked like Kevin Kline when he's pretending to be French. Or maybe a talking frog wearing an ill-fitting beret and neckerchief and speaking with a fake French accent. Now THAT'S comedy.

Unfortunately, coming from inside the McCain camp, this is not funny -it's worrying. My guess is that some staffer who watches a lot of late night TV comedy came up with a joke, and the entire campaign is so out of touch with the real world that they thought they could go for the laugh and be as popular with the kids these days as that whipper snapper Stephen Colbert. (Message = See, John McCain isn't that old...he's down with the satire, yo. Word.)

Yes, these sorts of diplomatic skills will work wonders with our foreign colleagues. Glad to know all that experience is giving us dividends, Gramps. And nice touch telling the few remaining press that might still be sympathetic to you that they're a bunch of no-account losers. I'm sure that will endear you to them, as it illustrates that you're on their side. Perhaps for your next press conference you can make a pass with a picture of some redneck in front of his foreclosed house drinking a Coors (not a Bud now that them Belgians bought it,) and he can be whining about the price of gas. That's a really funny way to remind people that Barack Obama doesn't like them and is responsible for the oil crisis. (Which is all in their mind, according to Phil Gramm. I mean, seriously, people. Buck up.)

Just tell us you're running with Tim Pawlenty to get a few minutes of coverage and then ride this thing out. He'll be back from his trip next week and things will go back to normal.

Oh. And no, it doesn't make you look at all bitter that the other guy is getting more attention. Nope. Not even a little. Seriously. Why would I lie?