February 27, 2009
There's been an intervention, and it has been pointed out that my excessive use of twitter at the expense of this blog is a cop out, a sin and all around lame. I have been instructed to remedy this immediately. The intervention came from this guy: 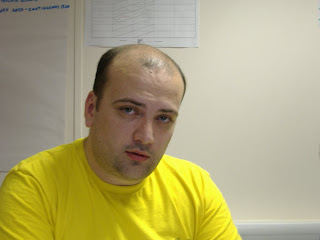 I know what's good for me, so I apologize for my excessive lameness and will begin my regular and frequent full-length blogging with a bulleted list of updates to bring you to speed on my days in Chicago. (I will, however, act out passive-aggressively by mumbling something about how Simon should probably not wear yellow on days when he's that hungover.) Now, for the updates:

Joe said…
Glad to see you blogging again since I neither tweet nor facebook. We're rested and ready from our trip, and I'll get hold of you soon so we can meet up?
4:22 pm

michaelg said…
You are right to be blogging again. Thanks to the man in yellow. Not many people can wear that color, but he does it nicely.

Be nice to the Ford Flex. It is the middle age white man's pimp car with all those huge ass moon roof things and the optional center console refrigerator and the leather seats like butter. Yes, I sat my ass in one and really liked it.
10:09 pm

I could use some sex-on-legs. maybe he could come look at bengali food when he is done with hotdogs?
12:24 am

Dale said…
It sounds like pretty grueling work getting all your personalities onto resumes but I'm glad you're keeping busy and finding at least 11 things to say in long form! Hello, hello!
6:16 am