Travels in the South

October 31, 2005
On Thursday, we headed to the countryside. We started off at Stonehenge. It was a glorious day, with spectacular sun and warm temps. 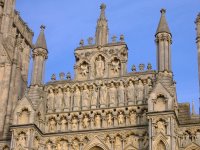 Next stop - Wells and their cool cathedral. Wells is a really cute little village, and there's this great ruin of a medieval castle right next to the cathedral. Not to mention some really fabulous shoe stores.


Then on to the Cheddar Gorge and Bath. Our hotel was in a great location...centrally located within walking distance of everything. We went to a cool little bar for cocktails, where Patricia helped strike up a conversation with the bartender and a local guy who was bellyed up. We enjoyed a couple rounds with them, then headed down the street to a little French place for a scrumptious dinner. 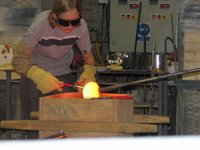 Friday we spent the day in Bath seeing the sites. In the AM we did the Roman Baths, and then in the afternoon we split up. Patricia and Susan went off for more costume stuff (Bath has one of the best collections in Europe.) Katie and I stopped for a beer and then went to the Bath Glassworks for a glass blowing demonstration. Katie got a wineglass, and I got a pair of cufflinks and a shiny ring.

We stopped at Sally Lunn's for a Lunn bun snack. Yum Yum. It's this crazy, fluffy, kind of sweet kind of savoury breadlike thing, and then they put a delicious topping on it and broil it. I believe our table tried the strawberry jam, the lemon curd, the cinnamon toast, and the welsh rarebit (basically cheese and worcestershire sauce.) Oh. And tea, which is killer yum. Perfect fortification for the drive to the Cotswolds. Though we did hit a traffic jam and I needed a little supplement with some roasted peanuts.

We stayed the night in Painswick, this picturesque little stone village nestled into a hill. Driving in this town was a total trip...imagine single lane switchbacks with six feet tall stone walls on each side, and two way traffic trying to use them. Our little inn was built in 1472, and had low ceilings, beams, and four-poster beds. 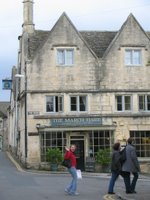 They had a pretty decent thai restaurant with a fixed menu, as well, and so we had a delicious dinner there. There was a crazy couple in the corner getting drunk and talking loudly, and we ended up engaged in conversation with them until about 1 AM, mostly because we couldn't find a graceful way to exit. The guy (in fact, his name was Guy) was pretty much a muscular, over-cologned, hairy jerk who talked too loudly and told bad jokes, but his girlfriend (Lorna) seemed nice enough, poor thing.

On Saturday we did a wander through the Cotswolds. Really pretty area...all sheep and hills and little twisty lanes. We were overly ambitious so we didn't have time to walk the fields, which in retrospect would have been a good thing to plan, but it's a beautiful area of England and we saw some breath-taking scenery. And the best part...it's near Milton Keynes so we could come back to my place that night for a dinner of nibbles and wine, with a few loads of laundry on the side.

We had a great little breakfast, and then the weary travelers headed to London. I said goodbye at the train station (no tears, just hugs), and then Patricia and I drove the luggage to Hampton Court, where the girls spent the night. I came home and went to bed at 9...I was positively exhausted...and then everyone returned to their real lives today.