Random thoughts on my brain

May 13, 2008
Some people do randomness with their iPod. I'm doing it with the miscellany on my mind.

1. Colgate is really about the best toothpaste ever. I'm four-square against Crest, and though I like the taste of the cinnamon flavour Tom's of Maine, I feel better with industrial-strength, fortified toothpaste attacking my tartar and plaque and preventing gingivitis.
2. Now that I'm tan, I have become obsessive about moisturizing, which helps one retain one's golden brownness and avoid pesky flaking.
3. I have purchased a cocktail dress for our graduation ball that is not black. It is teal/brown iridescent, and it will likely require the purchase of gold sandals. I don't wear gold. I obviously did not think this through.
4. I removed my second Hillary rant because I'm so frothy that I decided it needed revising to a stronger, more anti-Hillary sentiment. Hillary, you really suck. You know that?
5. I love it when the weather gets warmer and I can break out my sandals and skirts and lighter clothing. But I hate blisters and chafing.
6. Last Friday I met my friend Yvonne and a few other people in Hyde Park for a picnic. It was incredibly fun. In fact, I spent about four or five hours total in the park. I got to eavesdrop on all sorts of interesting conversations, many of which I couldn't understand because they were in languages I don't speak. I especially liked the granddad playing "cuckoo" from behind trees with his granddaughter who was a toddler. (Cuckoo is peek-a-boo for Germans.)
7. Just finished The Book Thief, which I adored. It made me weep openly. The quirky narrative voice was vaguely Vonnegut-esque and I found it quite effective (though admittedly not as edgy and at times a bit contrived.) And the characters he created - with subtle details and mannerisms and behaviours - were some of the most vivid I've found lately. In fact, the sweetness and beauty of a few of them positively broke my heart. I've been thinking about death a lot, what since it's just about a year since my dad took a turn for the worst, and the way this book deals with loss and death resonated with many of the questions on my mind. It won't be to everyone's taste, but I'd say give it a try.
8. My favourite poet is e.e. cummings. Way back in 1989 I purchased an anthology of his poems in paperback, and I've worn the thing into loose-binding, missing-pages disrepair. So I decided that, as a graduation present to me, I would purchase a hard copy version that has everything he ever wrote. On the back cover there's a different picture of him than the bespectacled, sixtyish one on my old version...and I must say, even though he's of my grandfather's generation (who was older than most grandfathers of people my age), I think he's a stone cold fox. This is the top half of the picture: 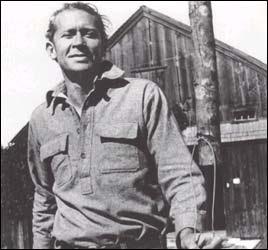 In the bottom half, he's wearing baggy dungarees and standing in a lanky, casual recline against a fence, and he looks devilish and clever and relaxed and intense. When you combine this with the eloquence and beauty and humour of his poetry, I must confess I've developed quite a crush.
9. I have very strong thumbnails. My other fingernails are kind of bendy and brittle, but my thumbs, man, they grow and they don't break. My left thumbnail is a bit long right now, and kind of sharp. Last week I accidentally poked my nose and took a divot out of the tip (which, of course, just looked like a giant zit-scab,) and today I accidentally stabbed my forehead. It hurts more than the mild concussion I got when I fell down the steps and slammed into the wall in November. Note to self: cut thumbnail, or at least file the damn thing before you put an eye out.
10. ABC just announced that it is going to do a David E. Kelley version of Life on Mars, a show that aired here in the UK a few years ago. If he doesn't screw it up, it should be very very good. The original rocks. Speaking of crushes (as I was in number 8,) I developed a completely inappropriate crush on the crass lunkhead DCI Gene Hunt. In the US version, the character will be much tamer. Remember that if you end up watching the show. Whatever they do with him, make him 10 time crasser, more sexist, less honest and then add in real swearing, and then you'll understand why I'm ashamed. There is something wrong with me.

lulu said…
I recently finished The Book Thief as well. What a wonderful book, and yes, I too wept openly.


As for the chafing,there is a product called Body Glide (no, not that kind of product) that is used by runners to prevent chaffing during marathons. You can get it at sporting goods stores, and I can tell you, living in a hot and humid climate, that it REALLY works. Great for thigh rubbage, strappy shoes and all other kinds of ouchy stuff.
11:52 pm

Melinda June said…
I will definitely try that...but will giggle when I buy it.
4:50 pm

The Book Thief was pretty awesome wasn't it? I bought it for my daughter who loved it too.
12:38 pm